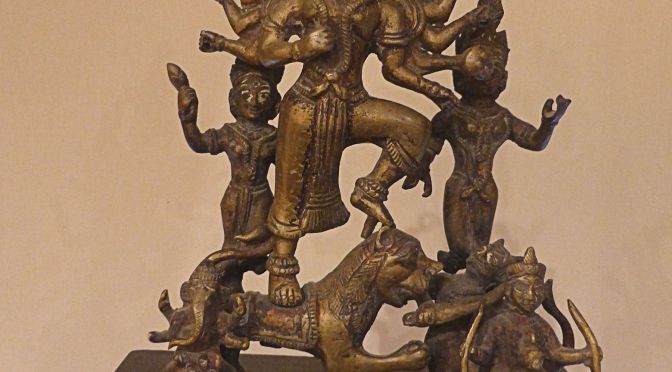 Durga is a representative of female power in Hinduism and is also identified by the Hindus as Adi Parashakti, Devi, Shakti, Bhavani, Parvati and numerous other female forms. She is a warrior goddess and the source of Hindu mythology for combating evil and demonic forces that threaten peace, prosperity and dharma of the good. Many of Hindu Art and sculpture represents her fierce role as the protective mother goddess ready to unleash her anger against evil. Given her multirole it is not surprising to see the Hindu religious artisans throughout the ages focussing their skills in depicting Durga’s power and emotions.

Some of her artistic and sculptural representations of Durga are as a goddess riding a lion or tiger, with many arms carrying weapons. Her most ferocious form of defeating Mahishasura ( buffalo demon) with its head in her hands is the ultimate display of fate of the evil demons in her hands,

Not only venerated as a destroyer of evil but also she is equated with the concept of ultimate reality called Brahman for creation of the universe. Durga has a significant following all over India, Bangladesh and Nepal, particularly in its eastern states such as West Bengal, Odisha, Jharkhand, Assam and Bihar. Durga is revered during the festival of Navratri celebrated by Hindus all over the world.

Art and Sculpture of Durga