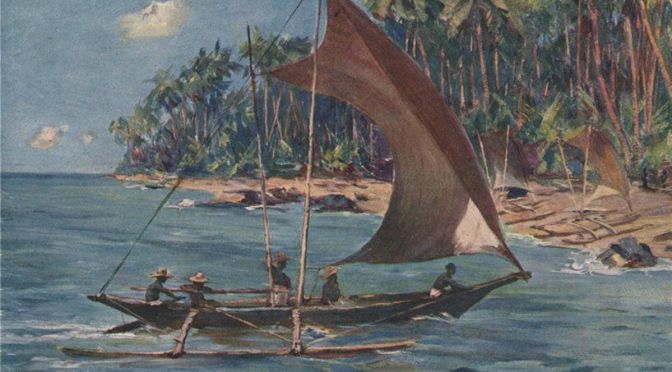 Milton’s choice, the utmost isle,
A paradise lost to a sinner’s vile
Eve’s tears of shame and guilt
Ample drops for lakes to brim,
Adam’s foot on the mountain top,
A reconcile to his mortal crave

Sumanakuta where pilgrims lay
At first man’s foot, do they pray
Heavenly clouds blur their eyes,
Sorrowful tears brim their brows
What heaven is this that reaches the sky?
Lost to man forever for his sin and vile

Kuveni’s wail for her master’s love,
No avail to the prodigal prince
Cast away from her den of love
Meant to die for her treacherous deed
To her brethren of noble creed,

For millennia did the Yakkhas rule
Almost since dawn of time
Sans vice or greed
Joyful in their wild abode
Oh! What a shame now
To be deceived by their queen

Serendib, an Arabian dream
Of Aladdin’s Cave and Sinbad’s tales
A pledge of wealth most abound,
Twinkling pearls and sparkling gems
Nature’s den of assorted hoard
The ocean’s pride, a fantasy isle,

From far ashore, the navy came,
In quest of wealth for their Hebrew king,
Ophir, from the Book of Kings
A land of gems for Solomon’s queens,
Priceless stones for his shrine divine

A draught of arrack with a honey taint
A gentle snooze on the gold coast isle
Beneath the shadow of the palm tree trail,
Ocean waves for a lullaby tale,
And scented breeze of cinnamon wild,

Marco’s haven on the gem stud soil,
While his fame at Kublai’s aisle
With the spoils from Mahavamsa isle
A Persian queen for a romantic stroll
On the shores of the coveted isle,
Oh what a romance in royal style

From far away by sea they came
Spelling dome to the peaceful isle
Eating stone and drinking blood
Aiming guns and cannons, they did
Instil fear into native soil
Alas, an end to Mahavamsa Isle

A poem by Anton Sebastian,

Author of A Complete Illustrated History of Sri Lanka

One thought on “Paradise Lost, the Utmost Isle”