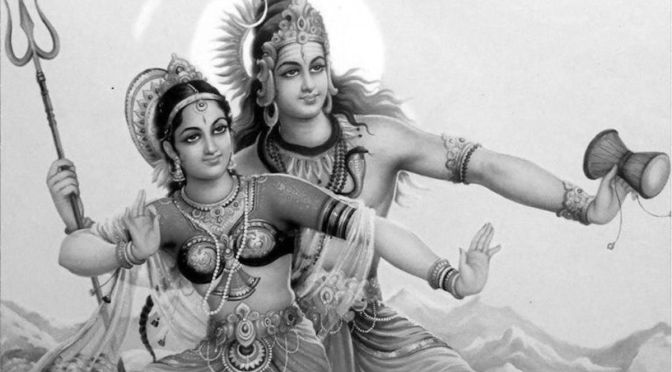 Shiva is a philosophical concept in Hinduism encompassing the universe and its contents. His abode in Mount Kailash in the Himalayas, one of the highest natural positions on earth, close to the source of some of the longest Asian rivers: the Indus, Sutlej, Brahmaputra, and Karnali also known as Ghaghara (a tributary of the Ganges) signifies the essence of nature. His depiction as Linga portrays the male procreational power of the mankind which took its origin during Vedic times around 1400 BC. In the bible during creation god produced Eve out of Adam’s bone so that he is not alone. According to Hindu faith, Shakti (Parvati) was created as consort of Shiva symbolic representation of Linga and Yoni.

Of the Trimurti or  triumvirate, Brahma is the creator, Vishnu the preserver of the universe while Shiva is endowed with the power of destruction. Shiva’s role in Hindu philosophy takes multiple forms. The androgynous image of Shiva as Ardhanarishvara (Ardhanaranari) is a philosophical model conceived in 100 to 300 AD during the Kushan period, or possibly even earlier. In this iconic representation of Shiva, one half of the image portrays his male attributes with a short dhoti and without developed breast, while Parvati wears a long dhoti and female breast. The 3rd eye is common to both as they share the wisdom and power together as supreme god and goddess.

The choice of Nandi (cow) as Shiva’s vehicle reflects the pastoral origin of human civilisation and possibly the mother nature of Dravidian goddesses. Nandi and Shiva together, perhaps the first depiction, appears in the oesho gold coins of Kushan of the early Christian era. The presence of the statue of Nandi at the gates of most temples dedicated to  Shiva underpins the spiritual role of the sacred animal in Hinduism.  The most iconic image of Shiva as Nataraja (natyam; dance, raja; king) comes from the Chola and Pallava period (400-1200 AD) when metallurgic Hindu art

According to Shaivism sect whose main deity is Shiva, he is formless, limitless, transcendent and unchanging absolute Brahman. There are many interpretations to  Tandav (Tamil, tandavam; dance) image of Shiva. As the cosmic dancer he performs his divine dance to destroy a weary and ignorant universe in order to make preparation for the god Brahma to commence the process of creation. Nataraja is the most revered as well as most feared god in Hinduism embracing the extraordinarily rich and complex cultural heritage of India.  As he performs his cosmic dance with holy river Ganga flowing from his matted hair, he holds in his upper right hand the damaru, the hand drum from which issues the primordial vibrating sound of creation. His right hand he makes the gesture of abhaya, imparting assurance and divine protection. His upper left hand holds the agni, the consuming fire of dynamic destruction. His right foot tramples a dwarf-like figure (apasmara purusha), the ignoble personification of illusion who leads humankind astray. In his dance of ecstasy Shiva raises his left leg in a gesture known as the gaja hasta, providing refuge for the troubled soul. Encircling Shiva is a flaming halo (prabhamandala) which symbolizes the boundaries of the cosmos. Most exquisite feature of all is the divine and calm facial features of Shiva as he dances to destroy ignorance and save the universe.

Shiva is also tribal god depicted as a warrior riding a horse. As Khandoba (Martanda Bhairava or Malhari) he is worshiped mainly in the Deccan plateau of India, especially in the states of Maharashtra and Karnataka. He is the most popular Kuladaivat (family deity) in Maharashtra, the foremost centre of his worship being Jejuri. Khandoba is also the patron deity of warrior, farming, herding and Brahmin (priestly) castes, as well as several of the hunter/gatherer tribes that are native to the hills and forests of this region. The cult of Khandoba has linkages with Hindu and Jain traditions, and also assimilates all communities irrespective of caste, a concept alien to Brahmins. The worship of Khandoba developed during the 9th and 10th centuries from a folk deity into a composite god possessing the attributes of Shiva, Bhairava and Surya.

The Image of Shiva as he is portrayed in various forms, meditating ion Mount Kailash, performing his Tardive dance, riding a horse wielding a sword, or seated on Nandi are a product of Hindu mythology, faith and philosophy expressed through religious art.