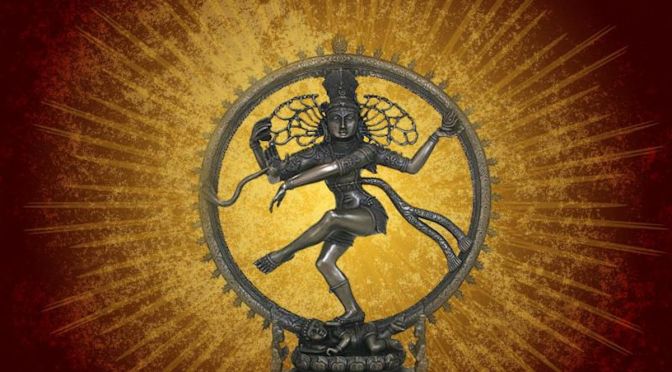 Hinduism, one of the oldest religions in the world is spanned by multitude of gods and goddesses. Shrouded by thousands of mythologies these gods evolved in to thousands of regional gods all over the Indian contiment with specific attributes. Shiva is known by many forms and names, the most iconic of them being the Natarja. His other symbolic representation is Ardhanushvara where he emanates his power through gender: both as a male and his female consort. Of the

Trimurti or Trinity in Hindu religion, Brahma enjoys the least popular worship inthe present times. The next of the Trimurti Vishnu who is a Vedic god is diversified through his many avatars, at least eight, all of whom are gods in their own right contributing to the vast Hindu pantheon worshipped in millions of temples all over India.

The early elements of Hinduism are witnessed in the pre-Aryan culture of the Indus Valley 5000 years ago. Sir Mortimer Wheeler referring to Indus findings states “…… thus by far is the largest unitary civilization of pre-classical times.” The proto-Hindu images of Lingam,

Yōni and Pasupathi found in Indus supports a Dravidian origin for Hinduism. Around 1700 BC the Aryans arrived at the Indus region bringing with them their gods of nature: Varuna, the controller the cosmos, Indra, the ruler warrior of the sky and wind, and the terrestrial Agni or the god of fire.  The Vedas were composed by the Aryans over the next 500 years but not put down in writing until a thousand years later.  The Dravidian personified gods such as Shiva, Muruga, Ganesha, Valli, Krishna, goddess Shakti (Parvati, Durga, Kali) merged with the nature gods of the Aryans  in to the present form of Hinduism.

Kushan kings of North East India in 100 to 300 AD were the first to depict Shiva and Nandi on a coin which we able to hold in our hands with marvel today. The oldest iconic Hindu Art and Sculpture emanates from South India as seen in the dancing deity of creation and destruction, Nataraja from the Chola and Pallava period. Lord Shiva’s physical and symbolic mergence with his consort  Parvati, as Ardhanarishvara encompasses the entire principle of Hinduism: creation as a union of female and male forces driving the cosmic power.

Visit Iconic Sculptures of the Hindus