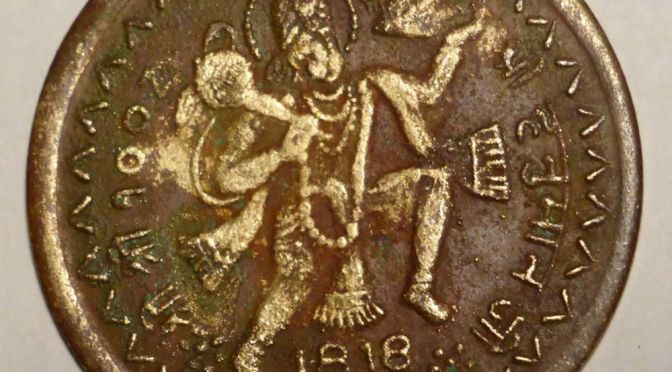 There are more animals and immortals depicted on coins than Gods.  Yet religion is the oldest culture in the world. Religion and deities depicted on coins are construed by some pious people as effacing the value of their gods. Coins are a part of everyday life for everybody, and religious coins can also be a reminder to the presence god in daily life. In a puritan’s sense the use of religious coins in monetary transactions could mean that god looks over honesty and integrity when his image is used.

It is notable that the first ever mortal figure of Buddha (Boddo) too was on a coin by Kanishka I (the Great) who was the emperor of the Indo-Greek Kushan Kingdom in 127–151 AD.

The Hindu religious coins have been issued since at least 2000 years ago, first by the Kushan kings of India in Greco-Roman style. Often made of gold, they are an expression of the power and pomp of the kings when it comes to religion. The high value of these coins is one of the reasons for then being preserved in such pristine condition, but unfortunately they are far and  few and rare.

The Shiva and Nandi coin of the Kushan kings of Indo-Greek Empire, originating in Bactria (the present Afghanistan, Peshawar and Pakistan) is not only an example of exquisite expression in Hindu Art, but also the earliest known depiction of Shiva and his sacred vehicle, Nandi.

Rama and Sita on the Darbar, Temple Token, 19th Century

In India Temple Tokens were produced since 19th century but more recent productions to generate funds for temples are common. Most of these coins carried the effigies of Rama, Sita, Lakshamanan and Hanuman. The Jain tokens were relativly rare. It would be difficult to precisely date them but the wear and tear and pattern would be of guidance in valuing them. However almost all the  gold tokens usually genuine. It is an experience and pleasure to hold these old
Hindu coins in our hands.